This T-shirt is especially for fans of Het Twiske. This 650-hectare nature reserve in the north of Amsterdam owes its name to an original tributary of the ‘IJ’ in Amsterdam of which not much remains due to impoldering. Except that this beautiful recreation area is named after it. Despite the fact that there are several beaches, it still feels like untouched nature in between. Especially if you get lost and suddenly come across a Scottish Highlander.

One third of the Twiske consists of water and that is noticeable by the many bridges. With the wind, the miller of the ‘Twiskemolen’ (who really lives in the mill with his wife!) tries to keep the water in the ‘Twiskepolder’ up to standard. There is also a lot of fun for kids. The Adventure playground in the middle of nature with a ropeway, a suspension bridge and ferries over water. Or the ‘Speelsloot’, literally a playground in water.

You can also order this Twiske Tshirt in women’s or men’s sizes. 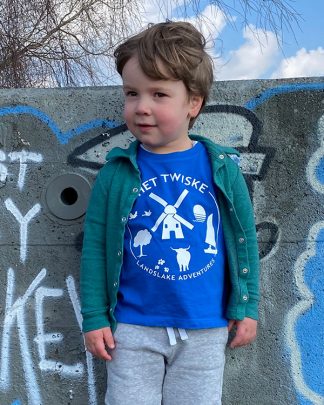